To my neighbors at Halloween,

If my teenage son comes to your door this Halloween, please give him candy. Whether it is wholesale school snacks or the classics, just give him something, please.

See here’s the thing: My son is nearly 13, but he looks much older. He’s 5’6″ and has the beginnings of a pretty awesome mustache. He is going to dress as Red, one of his favorite Pokemon trainers and he is already talking about candy trades with his sisters because he is a kid. He is a kid trapped in a nearly adult body.

He’s a kid. He laughs at potty jokes and fart noises and spends his money on trick gum and hand buzzers.

He’s a kid. He’s still ticklish. He likes to snuggle up on the couch with mom when he is sick and sometimes even when he is not.

He’s a kid. He loves candy. It’s possibly his favorite thing and I catch him sneaking it from the pantry on a pretty regular basis.

His days are mostly spent in a world that vacillates between child and adult.

In case you don’t remember back to those days, it’s pretty confusing-waking up with growing pains in the middle of the night, growing so fast your new shoes only last for 6 months, navigating your way through the social traps of middle school, walking a fine line between independence and dependence. Not to mention the hormones.

But Halloween should not be confusing. Halloween should be a night of pure fun complete with a sugar high! Let my son be a child on Halloween. Don’t let his height, his unstable skin, and the beginnings of a mustache fool you.

So please don’t ask him how old he is with a wary eye. Don’t ask, “Aren’t you too old for this?” Don’t refuse him candy. Don’t shame him for doing what kids should be doing. Just let him be a kid.

Look, he’s certainly not going to look as cute as the preschoolers dressed as Wizard of Oz characters, the little girls in their princess and fairy costumes, the little boys dressed as superheroes and ninjas. He may be taller than you, with a pimple or two, dressed in a costume of a guy you’ve never even heard of. But I promise you this: he will be dressed up and he will be polite, all while helping me keep an eye on his three little sisters. So, could you find it in your heart to toss him a candy bar?

A mom of a teen 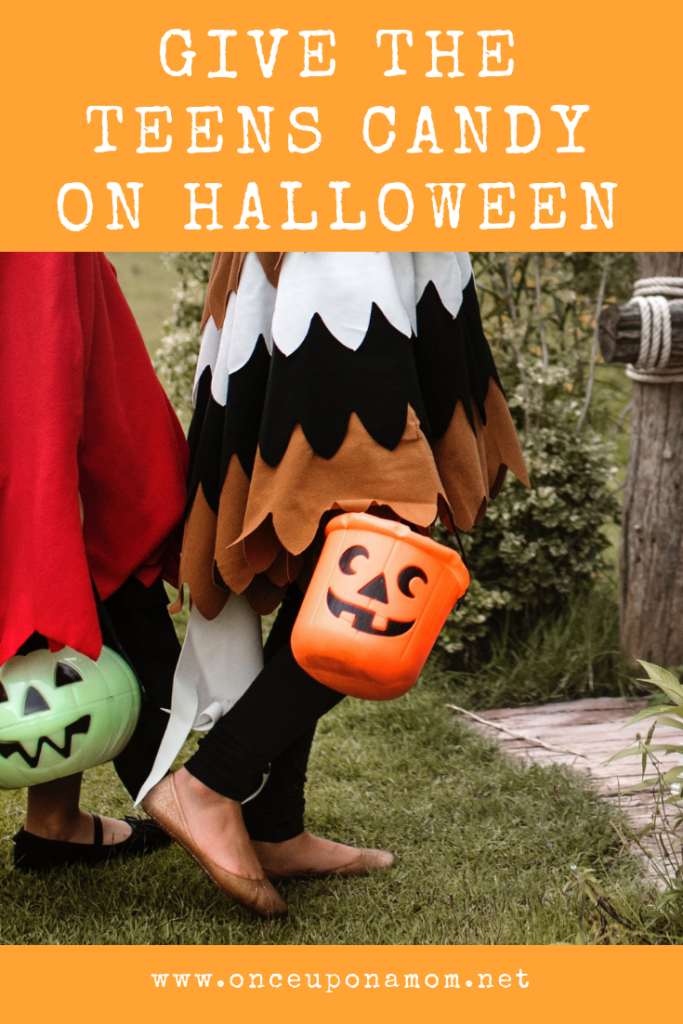