This here is my minivan, Bertha. Ain’t she purdy?

She looks like a Bertha, right? If she were a person I imagine she’d be in her mid 60’s with big fluffy grayish white hair that curls away from her face. She’d be chubby wear cardigans and comfortable brown shoes. Sometimes she’d be a little grouchy when her gout was acting up but mostly she’d be cheerful.

She looks great in this picture – but don’t be fooled. I got lucky with that lighting. Really Bertha is pretty beat up. First there’s this rusty scrape that goes allllll the way down the right side of the car from when that guard rail came from out of nowhere. Honestly, I haven’t even washed her since then because it’s like, what’s the point? 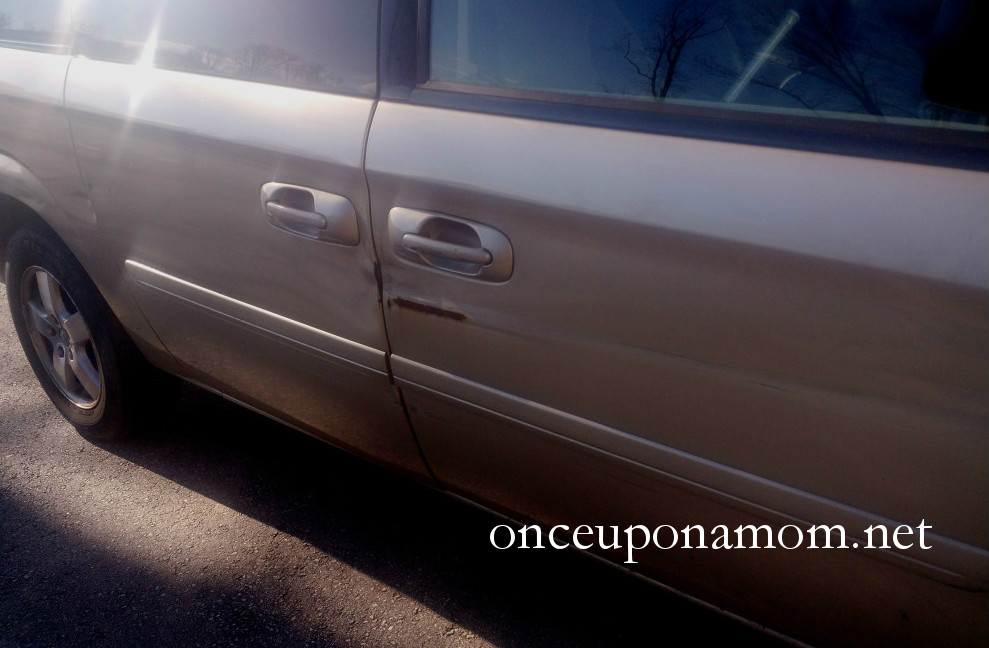 Then there are various dents and bumps and scrapes from throwing my kayak on top and having kids who like to play frisbee and wiffle ball in the driveway.

The automatic door on the left works most of the time. Except for when it doesn’t. But it works well enough so that when you push the button, you walk away expecting it to close without checking it. And then you come out of karate an hour and a half later to find  a gang of raccoons helping themselves to month old french fries. Ok, that last part may have been a little bit of an exaggeration.

The air conditioner doesn’t work. Well, it does work kind of. It blows cold air out of all the vents except the ones on the driver. Those blow burning hot air.

If it rained overnight I can’t steer for a few blocks.

The brakes squeak, well not the braks, but the break pedal. When I push it down it makes a faint, high pitched, “wheep,” like a sad little guinea pig.

It’s hard to explain the noise she makes when she’s idling, but it doesn’t sound good. It sounds like she’s tired, she’s struggling.

And so we are getting ready to say goodbye. And I am surprised that I’m feeling kind of sad about it. I thought I’d be ready to kick her to the curb and get a new, sleek van with a camera to help me back up and maybe some of that satellite radio and maybe even a DVD player built in for long trips!

All the times I drove around with one, or two, or three crying babies trying to lull them to sleep. The time when the girls were 3 and everything was hard and cooking dinner seemed like an impossible task so we scrapped it and hopped in Bertha to go out for ice cream. The time we got stuck in traffic on a bridge for 2 hours and I cried in the backseat along with the kids. The time we brought our cat home and she made cute little squeaking sounds the whole way home. The time the car overheated and we pulled over in front of my 6th grade crush’s house to wait for Daddy to come rescue us. All the trips to the doctors office, the sing-a-longs, the fights and the giggles, the chit chats, the prayers for passing ambulances, the everyday conversations.

When I started this post, I thought I’d end up at fake sentimentality. I thought I’d make a few jokes about how “important” a minivan is to a stay at home mom. But now that I’m here at the end of the post, I’m a little embarrassed to say that the fake sentimentality has turned real. And now I’m not really sure where to go with this. I wanted to end on a funny note but now I’m feeling a little melancholy. So much of our life is tied to that van.

So I guess I’ll just end by saying, “Thanks Bertha.”