I don’t really mind the idea of roughhousing. I grew up with two brothers so there was a fair amount of wrestling and broken lamps. Heck, sometimes there still is! I am pretty strict with my kids, but I totally let my kids jump on the furniture and roughhouse and ride their sleeping bags down the stairs. I know they need exercise (plus I don’t feel like taking them outside, so…)

I can tell my kids really enjoy it and really there’s only so long that you can wrestle around with your siblings (unless you’re my brothers!) Plus, I’m pretty sure at least two of my kiddos need to physically work out the stress of the day.

The part I mind is when they get hurt and come crying to me about it. It’s not that I’m without sympathy for my kids’ injuries, but it’s like expecting sympathy for how much your tattoo hurt. I mean, you knew it was going to hurt and you chose to get it anyway so…

Plus I don’t like the tattling. “She hurt me!” Of course she did, you had her in a full nelson! I would have elbowed you in the stomach too!

So, even though I don’t totally mind the idea of roughhousing, I knew we couldn’t go on like we were so I decided to write up some rules to keep the tattling and injuries to a minimum.

Rule #1: If you want to roughhouse, you must get the other person’s permission before you begin.

So, a lot of what was happening at my house was one kiddo would sneak attack another kiddo and then try to defend his or her actions by saying, “I was just roughhousing!” Most of the kids didn’t like to be jumped on from behind, so we instituted this rule. I love the formality of it, like two boxers before a match meeting in the center of the ring and shaking hands: “Brother, do you want to rough house?” “Yes, I would like to roughhouse.” “Then let the roughhousing commence!”

Rule #2: If you are going to roughhouse, you will get hurt.

This isn’t really a rule per se, it’s more like a waiver. I just wanted to let the kids know that although roughhousing starts out as fun it always ends up with someone getting hurt. And guess what kid? That person might be you!

This is my favorite rule. I mean who says Uncle anymore? It’s so old fashioned and I think the kids sound so cute when they say it! Plus I think it’s kind of funny that my kids are the only ones in their friend group who know it means stop.

Rule #4: If you hear someone say “Uncle” you must stop roughhousing immediately.

Since we’ve already established that someone will get hurt, we know we will hear the word Uncle. So listen for it and stop as soon as you hear it.

Rule #5: When you get hurt I do not want to hear about it (unless you are bleeding or have a broken bone).

Again, we know at least one kiddo is going to be hurt and honestly I don’t want them coming to me crying and telling me it was so and so’s fault and I need to punish someone. If the kids are able to successfully stop when someone gets hurt and grab their own ice pack and I don’t have to know about any of it, great! Wrastle away! The exception here of course, is if there is blood or another reason that we might need to run over to urgent care.

Rule #6: If you break any of these rules, you lose roughhousing privileges for at least one day.

See what I did here? It’s a rule and a consequence! A win win!

These rules work pretty well in my house! It was difficult for a time before the kids could read because I had to keep reminding them of the rules, but after a while they got used to them and now they follow them pretty well.

What about you? Do you have rules for roughhousing in your home? 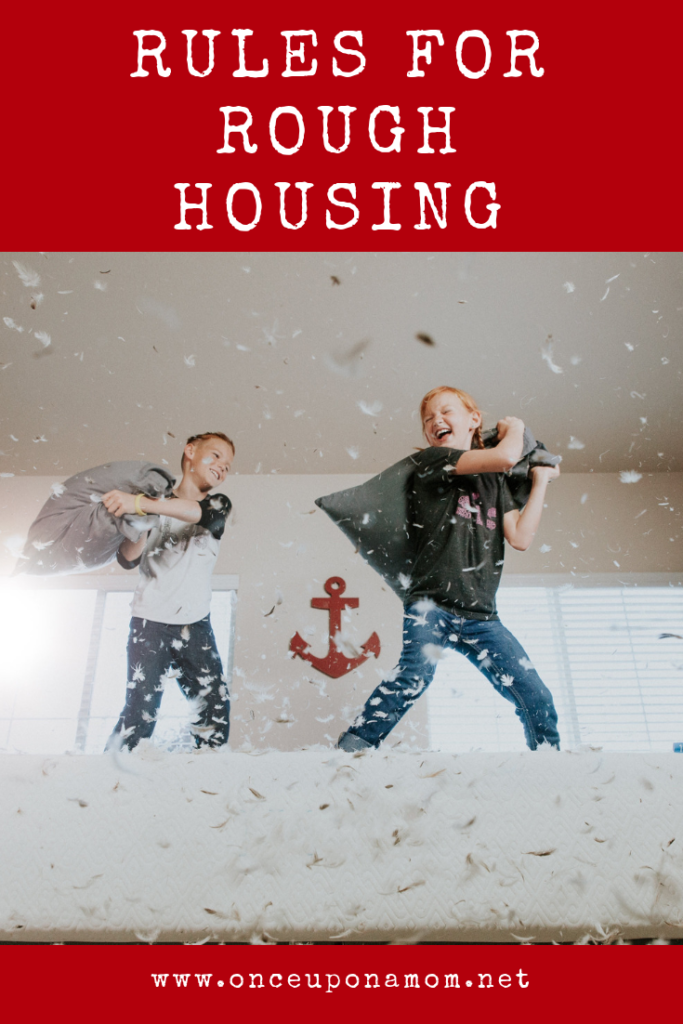 4 thoughts on “Rules For Roughhousing”