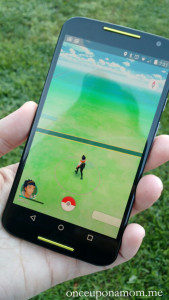 When I heard about Pokemon Go about a year ago, I dreaded it’s release, but now that it’s here, I love it-even though I don’t play and my kids don’t either. Here’s why:

My ten year old bestest boy loves Pokemon and has for the past 5 years. And when I say love, I’m putting it lightly. He has over 500 cards, most of the games, novels about the characters, he watches the shows and movies, and has almost all of the pokedexes (which, for you pokenovices, are encyclopedias of Pokemon-listing all the characters and details about them), from the one in his Pokemon yellow rom to the ones in his 3DS games. Before you think I spoiled him with all this stuff, please know that it took 5 years to accumulate this crap, I mean special, important, pokestuff, and a lot of it was in the form of gifts from our large and generous extended family. One of his cousins even got him a Pikachu onesie last Christmas, and he ran around the house yelling ‘Pikachu! I choose you!‘ So, along with everything else he has, it’s safe to say he is a huge Pokemon fan.

In a Minecraft world, being a pokefan hasn’t been too easy for my sonny boy. Pokemon is not popular in my son’s school. Very few of the kids play the video games or watch the shows. A couple have some cards, but they aren’t invested like my son is. Add to that that my boy is a little on the quirky side. But if you are a true Pokemon fan, you probably already guessed that. So, he has learned not talk about Pokemon at school; he doesn’t wear his favorite Pokemon shirt because “nobody else likes Pokemon, Mom,” and he holds his own with his knowledge of Minecraft, which more of the kids like. However, I have recently heard about a specific pokemon server that you can add to a Minecraft game. Perhaps playing this pixelmon server on Minecraft with his friends will encourage the interest of Pokemon in his friends and allow my son to not have to suppress his interest in it. You get the best of both worlds!

It’s not all doom and gloom though friends, luckily most of my nieces and nephews are also superpokefans! My boy pulls out his pokeshirt when he knows he’s going to see them, pokecard binder in one hand and Nintento DS in the other! We all go to the beach together for a week in the summer and the kids find a space to hang out, trade cards, play games, but mostly talk about Pokemon. We call it the pokeden. It’s super cute and honestly, a nice break for the parents who are sick and tired of hearing about it. Then all us adults can sit around and talk about stuff we are interested in-like who was Mom’s favorite!

Anywho-I was so apprehensive when Pokemon Go came out, I didn’t even tell Will. I don’t really have a problem with Pokemon per se, but I do know that when sonny boy spends “too much” time doing pokethings, he has a hard time switching his mind over to the task at hand. He gets lost in his own pokeworld and on the way up to brush his teeth, he forgets why he was going upstairs. 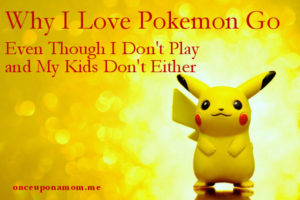 But of course I couldn’t hide it. And sure enough he started hearing about it from friends, family, Pokemon websites, and even on the news. I made sure to point out all the “Wow, Pokemon Go is so dangerous people are getting robbed and hit by cars” stories to dissuade him.

But then something really cool happened. I found out that the people playing the game aren’t necessarily the pokepeople. They are just people who want to play this game, which is actually pretty fun-even if you’re not a fan.

Then something even cooler happened, I was helping out at Sunday school and a teen helper asked the class if any of them had Pokemon Go. Sonny boy said no, but that he liked Pokemon. The teen said he just downloaded the game and found his first Pokemon, a little orange dragon. (I was thinking, “do you mean Charmander,” all rolling my eyes at his lack of pokeknowledge and then immediately thinking, “ugh, why do I know so much about pokemon?”)

But my son politely and enthusiastically said, “That’s probably a Charmander!” The two talked and the teen found my son again the next week to talk to him about the 76 more pokemon he found.

So now, I love Pokemon Go! Because people who aren’t true fans are playing it, getting interested in Pokemon, talking about it socially, asking my son questions, and appreciating his encyclopedic knowledge.

I know this won’t always be the case for him, that what the mainstream is talking about is something he’s interested in. Most kids in the school don’t have a special love for geodes, a crazy amount of knowledge about sharks and Greek mythology and prefer doing science experiments over playing soccer. And I’m ok with that. I love my quirky little boy. All these things he’s interested in are what makes him who he is and I wouldn’t change any little bit of him.

But I do have to admit that I am excited for school to start this year! So just once, my son can be truly involved and engaged in what the majority of the other kids are interested in!

I’m hoping the poketalk eclipses the Minecraft chatter. I’m hoping my boy dons his pokeshirt and lets his quirky flag fly and shows those Pokemon Go players what a true pokefan looks like.